How to File a Complaint

The CBA has developed a standard complaint form to assist complainants in providing the minimum information required before the investigative process can begin.

To fill out and submit the Consumer Complaint Form, please choose from the following options:

At the very least, the CBA requires the name, address and phone numbers of both the complaining party and of the licensee, copies of an engagement letter (if applicable), a synopsis of the facts and circumstances leading to the complaint, and copies of any evidentiary documents to support the complaint. In lieu of using the CBA's standard form, complainants may simply provide this same information in the form of a letter.

What Happens Once a Complaint is Filed

In every instance, the Enforcement Division immediately notifies the complainant by mail that the CBA has received the complaint. Then the complaint itself is subjected to an initial screening process.

Complaints beyond the jurisdiction of the CBA are closed. These include, but are not limited to, matters concerning fee disputes, employer/employee relations, and complaints involving unsubstantiated allegations from anonymous sources. Again, when a complaint is closed, the complainant is notified by mail of the action and the reason for the closure. A complaint is not public information unless the matter proceeds to enforcement action.

Cases concerning verifiable administrative violations (such as unlicensed practice, unregistered partnerships or accountancy corporations, use of unapproved fictitious names, or failure to notify of address change) will be examined for the possible issuance of a citation and fine.

The CBA asks that all complainants be aware that investigations of complaints and enforcement proceedings can be complex and involve a substantial amount of time. However, the CBA is committed to keeping complainants informed during all phases of the process.

To register comments/complaints about the California Board of Accountancy - Citizen's Complaint Form.

Filing a Complaint with the CBA

Consistent with the CBA's highest priority -- protection of the consumer -- the Enforcement Division's purpose is to oversee all aspects of the investigative and enforcement processes. It initiates complaints as well as investigates those filed by consumers. The subjects of such complaints and investigations include both licensees and those practicing public accounting without a license. As part of these processes, the Enforcement Division establishes if the CBA has jurisdiction under California law, and it determines whether enforcement sanctions should be imposed when CBA statutes and regulations are violated.

The CBA's professional Investigative CPAs investigate complaints based upon substantial and tangible facts relating to specific violations of the CBA's laws and regulations. The CBA has no authority under California law to regulate the fees charged by its licensees. Fee disputes are civil matters that are appropriately adjudicated by the courts or settled through arbitration. The CBA has statutory authority to discipline its registrants and licensees for violations of the Accountancy Act which may include:

Connect with the CBA

What to Know About Your Search 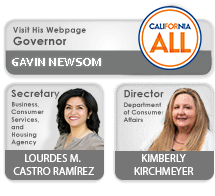